Sir Kensington attended Oxford University, attaining degrees in mercantile trade, agronomy, and culinary arts. When "Catherine the Great" of Russia, leaned in to request a side of ketchup from Sir Kensington, he ventured to the kitchen where he could find nothing acceptable. Sir Kensington decided to create a ketchup that would forever bear his name. He became a ketchup king, and to this day, the only commoner to have been invited to Buckingham Palace for three meals in one day.

It was not until 2008, when Brown University students Scott Norton and Mark Ramadan uncovered Sir Kenginston’s spice chronicles in their library’s special collections. They hoped to revive the Sir Kensington tradition. Through experimentation, Sir Kensington’s is now headquartered in New York City’s SoHo district and makes delicious condiments with character. They continue to bring new innovation and high quality products from fabanaise to mayonnaise and ketchup to mustard. Their classic ketchup uses less sugar, salt, and only non-GMO ingredients to bring distinctive, winning flavours!

Be sure to find some of our favourite products from Sir Kensington’s in one of our best selling Baskits, BBQ Sizzler! 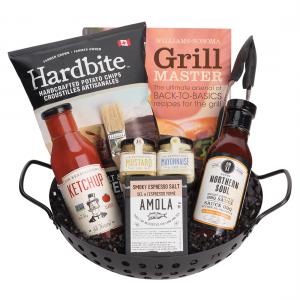