Hudson’s Bay Company was founded in 1670, and is one of the oldest and fastest-growing department store retailers in the world. In the 17th century, as a result of European demand for felt hats made from beaver fur, the fur trade emerged into a major commercial enterprise in North America. HBC set up its first operations at York Factory, on the Manitoba shores of the bay. Since then, HBC embarked on its journey to monopolize the entire North American fur trade. A ‘point’ system was invented as a way of indicating the trade-off of goods for furs. For example, the infamous Hudson's Bay blankets were traded based on a ratio. That ratio being quantity, or size, of furs to the size of a blanket or quality of the goods to trade. The Hudson's Bay Company has played a large role in the settlement of western Canada and their trading posts have helped develop the economy, secure supply lines and have ultimately shaped the future of our country.

Fast forward to the 20th century where HBC started turning to retail, becoming the main importer of fashions and accessories to Canada. After 346 years in business, North America’s first company still embraces and brings Canadians together. As the oldest company in North America, HBC’s portfolio today includes ten banners from Hudson’s Bay to Saks Fifth Avenue. 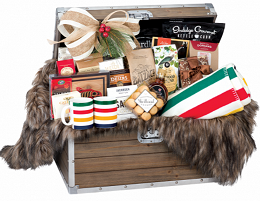